225 Gems
The Spider Web is a den item. It was originally released during the Night of the Phantoms on October 2015 at Jam Mart Furniture for 750 Gems. 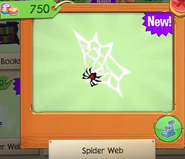 Night of the Phantoms 2015 design
Community content is available under CC-BY-SA unless otherwise noted.
Advertisement