180 Gems
The Rare Spooky Candy is a den item. It was originally released during the Night of the Phantoms in October 2015 at Jam Mart Furniture.

The Rare Spooky Candy has a bowl of candy atop a pedestal and the sign says “Take One”.

This item comes in an unknown amount of variants. 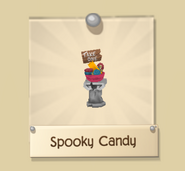 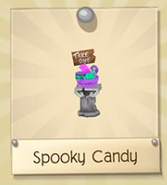