Not to be confused with the Spooky Witch Hat (Salesman) or the Shadow Witch Hat.

The Spooky Witch Hat is a clothing item worn on the head. It was originally released during the Night of the Phantoms in October 2015 at the Spooky Party for 1,000 Gems.

The Witch Hat appears as a tall, pointed hat with a belt buckle in the middle that resembles a stereotypical witch's hat. The hat is patched up on its left side and has stitches near the top. The top of the hat is bent over. 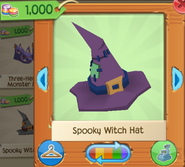 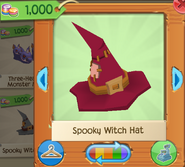 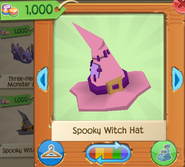 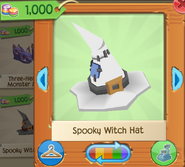 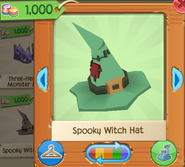 Add a photo to this gallery
Retrieved from "https://ajplaywild.fandom.com/wiki/Spooky_Witch_Hat?oldid=414928"
Community content is available under CC-BY-SA unless otherwise noted.