495 Gems
The Steampunk TV is a den item. It was originally released in January 2016 at Jam Mart Furniture.

The Steampunk TV is an old-fashioned TV and the insides are made out of cog wheels. On top of the TV there's a glowing yellow light and a moving liquid-filled tube below the screen of the television. When an animal sits down by it, the TV will play a video of a default Tiger wearing a black monocle and top hat slowly blinking.

The item comes in 4 variants of color. 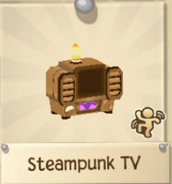 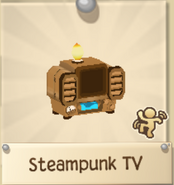 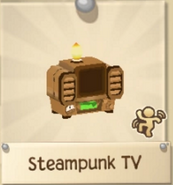