500 Gems
The Stone Tiger Statue is a den item. It was originally released in November 2015 at the Tiger Resort for 500 Gems.

The Stone Tiger Statue appears to be a gray statue, with a Tiger standing on top of a big rock. The statue has some pointy ends and some flat surfaces. This item only comes in one variant. 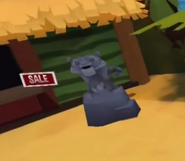