500 Gems
Not to be confused with the Top Hat.

The Stove Pipe Hat is a clothing item worn on the head. It was originally released in the Beta Testing at Jam Mart Clothing for 500 Gems.

The Stove Pipe Hat has not been sold in stores since the Beta Testing.

The Stove Pipe Hat is sturdy with pointy sides. There is many stripes going up the hat and buttons. It also has a band over the rim of the hat. 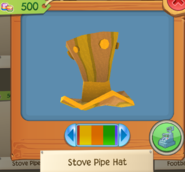 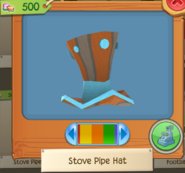 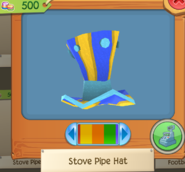 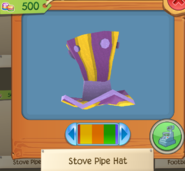 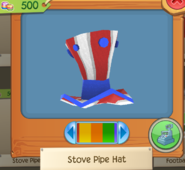 (Beta) item view.
Add a photo to this gallery
Retrieved from "https://ajplaywild.fandom.com/wiki/Stove_Pipe_Hat?oldid=217638"
Community content is available under CC-BY-SA unless otherwise noted.