225 Gems
The Tombstone is a den item. It was released during the Night of the Phantoms on October 2015 at the Spooky Party for 750 Gems.

The Tombstone is a grey, stone tombstone that sits on a small pile of grass. On the front there is a ghost like engraving with the eye of a Phantom. The tombstone is cracked on the top and side. 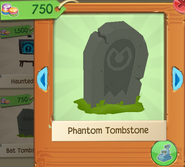