Traveling Salesman Shop
The Traveling Salesman, also known as Arthur, is a touring shop that travels all around Jamaa. He was first spotted in June 2017 in Jamaa Township and was spotted again in 3 more places: Mt. Shiveer, Crystal Sands and Coral Canyons.

Arthur is a raccoon with a purple-tinted grey color as his primary color. This color is not available in the color palette. He wears a red fez with yellow swirls on it string at the top as well as a red vest with similar designs.

The shop is a wooden cart with an open clothing book on it. The clothes or the den items provided are in different color variations than the original items.

Arthur sells a variety of items through the Traveling Salesman Shop every few weeks. 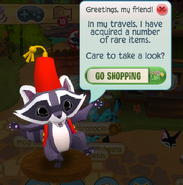 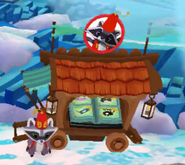