Not to be confused with the Pet Turkey Hat.

The Turkey Hat is a clothing item worn on the head. It was originally released during the Feast of Thanks in November 2015 at Jam Mart Clothing for 800 Gems.

The Turkey Hat consists of a ragged, patched-up fabric hat that resembles a turkey. The item comes in 3 variants. 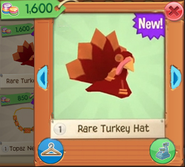 The Rare Turkey Hat was available on the 7th of November 2016. 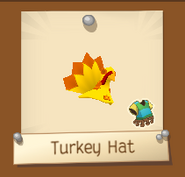