The Wild Explorers Tent is a room located in Coral Canyons.

The entrance to this location appears to be a giant tent placed directly on the orange rock of the canyon. On the outside, a section of rainbow material is patched over the top of the tent. A sign over the tent door reads "Wild Explorers," and is decorated with an image of binoculars and mountains. From the outside, the inside of the room can be slightly viewed through the open door.m

Inside, the tent is furnished with a flower-patterned rug in the center, two tables in the front, another table off to the left side, and two shelves on either side of a desk along the far wall. One set of shelves is filled with a variety of books along with some other decorations, while the other set of shelves is short with a fish tank stacked on top of it and an iguana habitat stacked above that. There is also a Phantom hanging in a cage in one corner of the tent; which periodically shakes the cage from side to side. 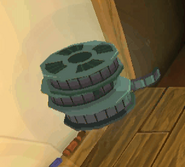 Cami's Frog on the top of the aquarium

A phantom in a cage

Wild Explorers Tent on the map

Add a photo to this gallery
Retrieved from "https://ajplaywild.fandom.com/wiki/Wild_Explorers_Tent?oldid=167259"
Community content is available under CC-BY-SA unless otherwise noted.